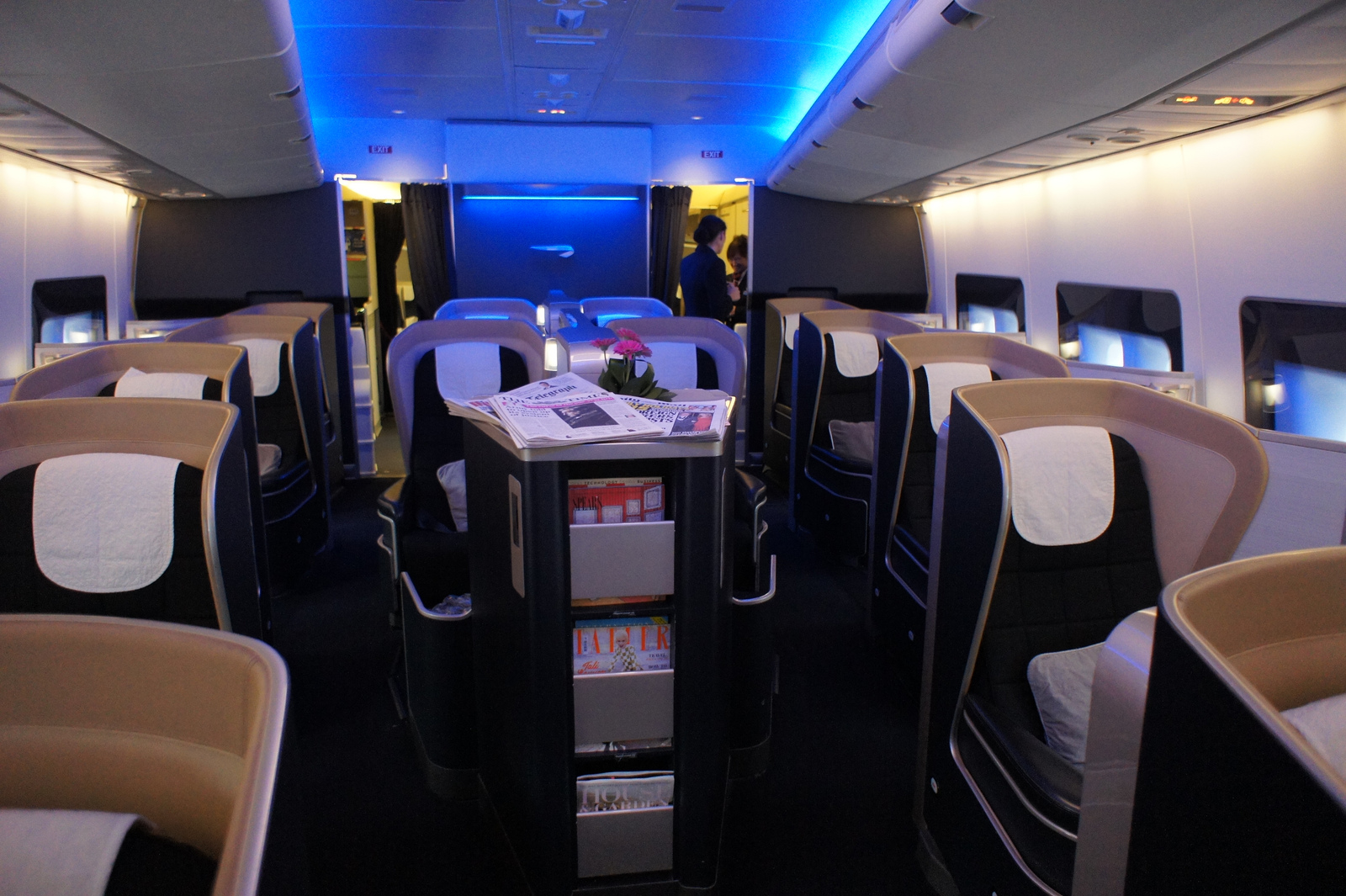 I had decided to try out BA after some disgusting service from Virgin on our last flight. So here is my trip report. Feel free to ask any questions 

We had decided that as we wanted to make the most of the First experience, we would check in at 05:00 (when check-in and lounges open). So we thought the easiest and nicest option would be to stay at a hotel the night before so as not to be getting up at about 02:30. After looking about at hotels and parking options, including how easy it would be to get to T5, we settled on the T5 Sofitel with included parking. This did work out slightly more expensive than else where but the ease of just walking into the terminal was well worth the slight premium, that and it being 5*.

So we arrived at the hotel, easily found a parking space, and then took the lift up to reception. We were warmly greeted and offered assistance with our bags that were taken to our room for us. Check in was quick and easy, we were soon on our way to the room. I would say that if you think of this hotel like a Travelodge/Premier Inn, you will be pleasantly surprised as I was. There was lots of room for the one night (although we didn’t have one of the smaller rooms); wonderful bathroom and all the furnishing were clean and modern.

After sorting out clothes for the morning etc, we headed off for a wonder about the airport. Had a ride on the pod’s (they could do with heating!), and took the HEX and Tube around the terminals to have a look at recent changes. We skipped out T3 as we have been there many a time! Once we were hungry we headed back to T5 and had dinner in Carluccio’s. Wonder food as always and we were treated to a bit of a show, as one diner was pointed out by HAL staff and promptly arrested by the Police. His dining partners didn’t really make much of a fuss and finished their meals! Dinner and drinks over we headed back down the scented corridor to the Sofitel and went to bed.

An early rise in the morning of about 04:20, so just enough time to shower, get everything ready and check out of the hotel to be at the First Class check in desks (the other side of the terminal) bang on 05:00.

We were welcomed politely (no asking of what class we were travelling or being directed away from the First Class desks) and shown to a desk. Check in agent as polite and chatty, and it was no problem at all for her when we asked for our bags to be checked through to DCA on our separately booked AA tickets. Luggage taken and in the possession of our boarding passes to JFK and on to DCA we headed for fast track security. Now it’s not quite private security channel (yet, there are plans), but we were through no longer than our experience of the VS channel. The HAL staff were pleasantly chatty and polite for that time of the morning.

Once through security, it was a turn to the right to the secret door/million pound door (avoiding the walk though all the shops), boarding passes checked and straight into the Concorde Room. Warmly greeted, asked if we had been before and wished a pleasant time. We made our way for the balcony/terrace and got comfortable. We were soon followed by a server who took our drinks orders that quickly arrived. It is such a calm and relaxing place to spend some time, looking out at T5B and all the aircraft movements (and not hearing any engine noise). We had both pre-booked appointments at the Spa; my partner went for the hydrating facial, where as I simply had a sit in one of the massage chairs. We both enjoyed our treatments and couldn’t feel more relaxed. Once back in the main CCR we opted to have breakfast in the dinning area. We were offered menus, juice and coffee. We both agreed the food was great and service fantastic. It is such a cosy and private place to sit and eat. 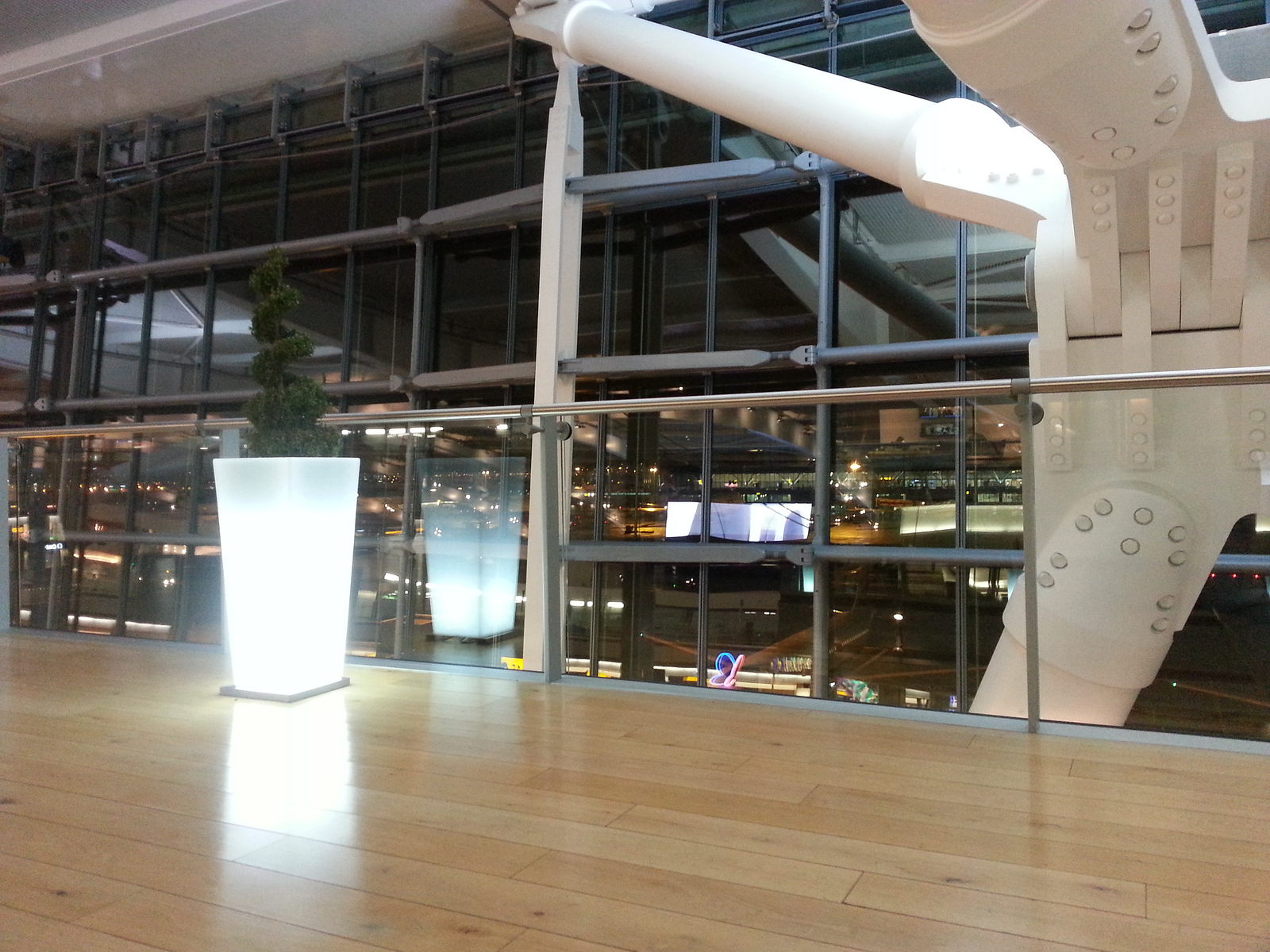 After some more lounging about on the balcony we saw our gate was open and over in T5B. On exiting the CCR we were wished a pleasant flight and we followed to signs to the transfer train. A quick and easy trip to B and upon reaching the gate boarding had just started. There was quite a queue for normal boarding but no one in the priority lane so we were instantly though and onto the aeroplane (noticing on the bridge the plugged windows confirming we had NF seats). Welcomed by name at the door and introduced to another member of staff who escorted us to our seats (this happens for all F pax). We had 1A and 1K (on a B747) so we could both have window seats and easily communicate. WOW! What a cabin. And what a seat! There was so much room in all directions! Drinks were offered and taken. Soon followed by an amenity kits and set of PJ’s each, presented on a silver tray. While the cabin was filling up, along with the rest of the plane, the crew were chatting and asked about our teddies, they were shocked that we didn’t have a flight log book for them and soon returned with one each. I think these books are intended for kids, but oh well! 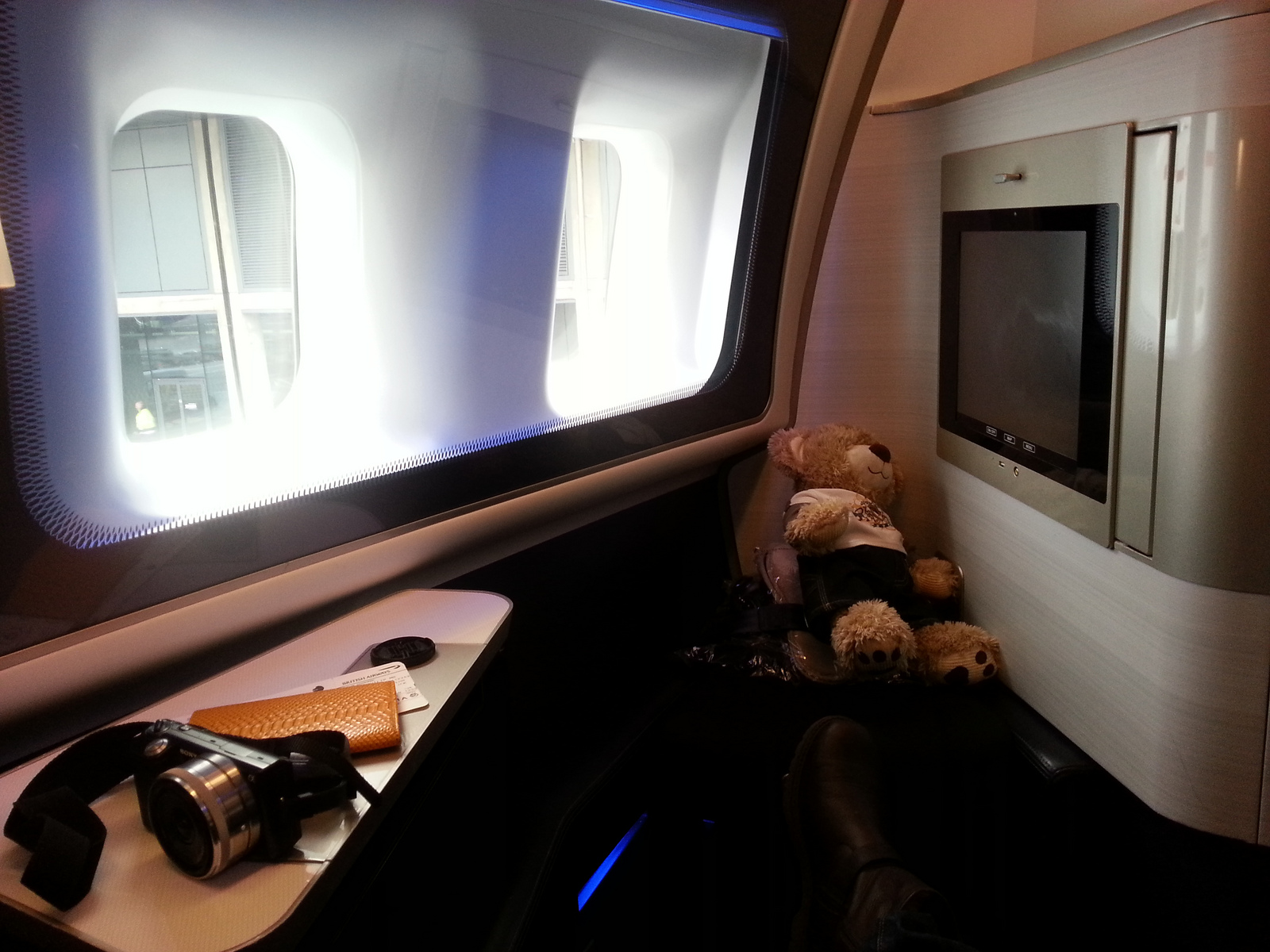 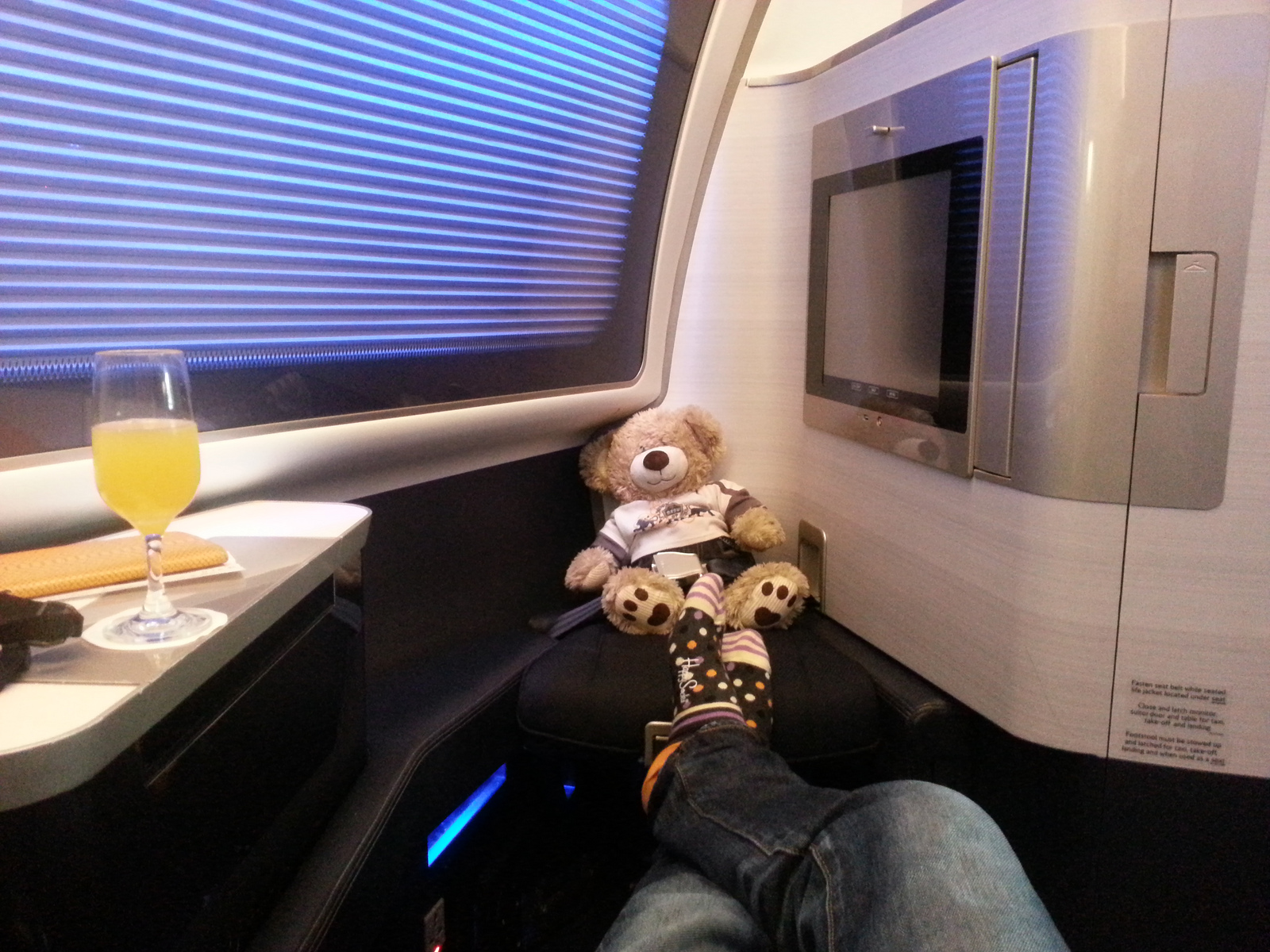 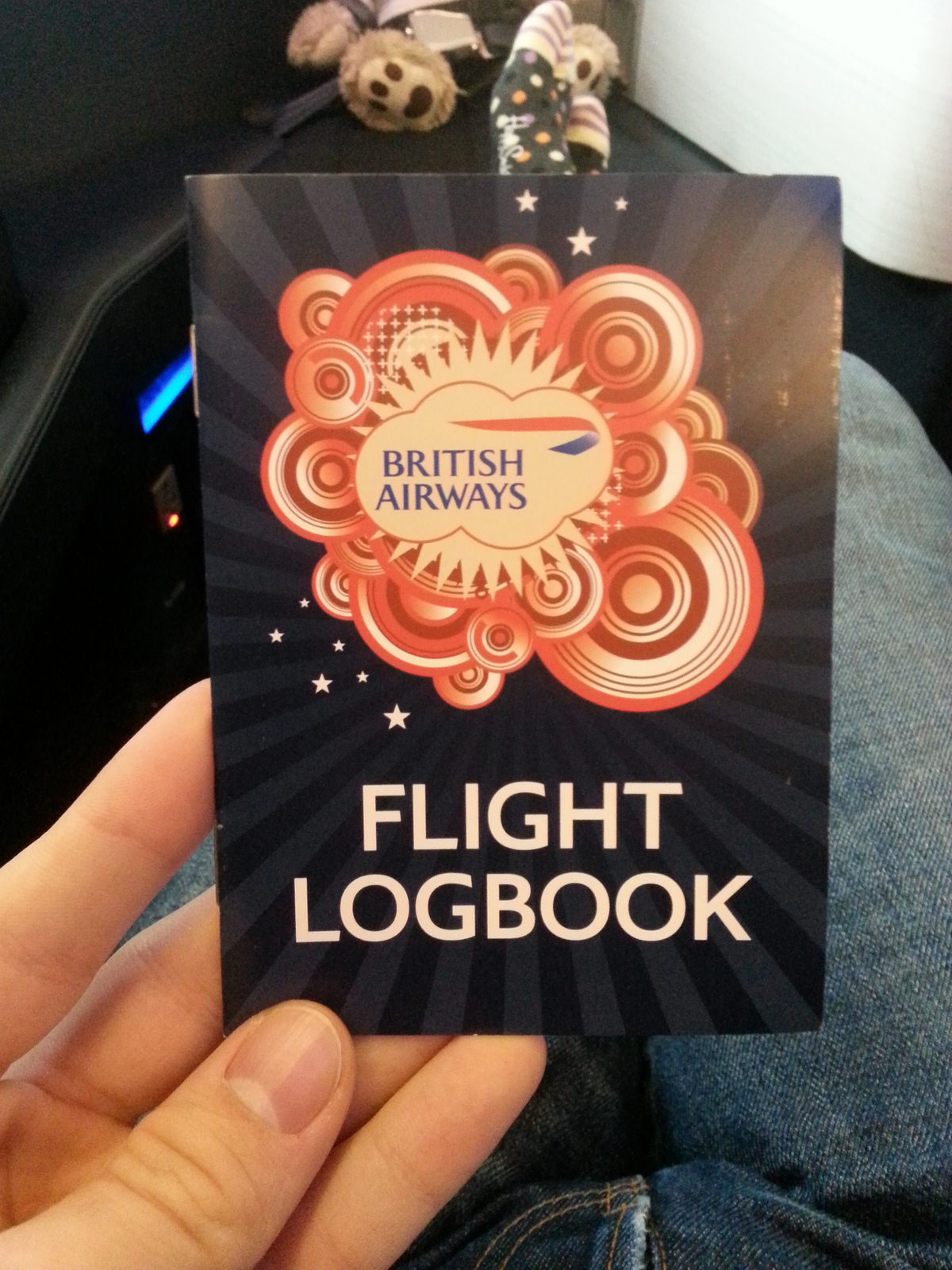 From stepping foot on the plane the IFE was running and passengers were welcome to use it as long as using BA supplied headphones. The screens in F and C do have to be stowed away for take off and landing though, but it meant the IFE was already on once in the air. Safety demo over, screens pushed back we were on the runway and taking off.

Once in the air the crew came around and took drinks orders and these were promptly provided. I had a look at the IFE (I was planning on using my iPad/mobile during the flight for entertainment, in-between playing with the fantastic blind!), it’s a nice large touch screen and a simple remote, but looking through there was very little content on the older 747 IFE. But this was no problem for me; I just left it on the decent sky map. Meal orders were taken I had a salad to start and Moroccan Chicken for main, we decided to dine together and must say it’s much more comfortable than Upper due to the much increased leg room and larger footstall. Once we had finished our mains we were offered desert, my partner chose the cheese plate, while I asked for an ice cream sundae. Our cabin crew member went off and came back to me with all my options for the sundae, the different flavours, sauces and toppings. This was soon produced and excellently presented in a cup; she really did seem to enjoy making it and the others that other passengers requested. 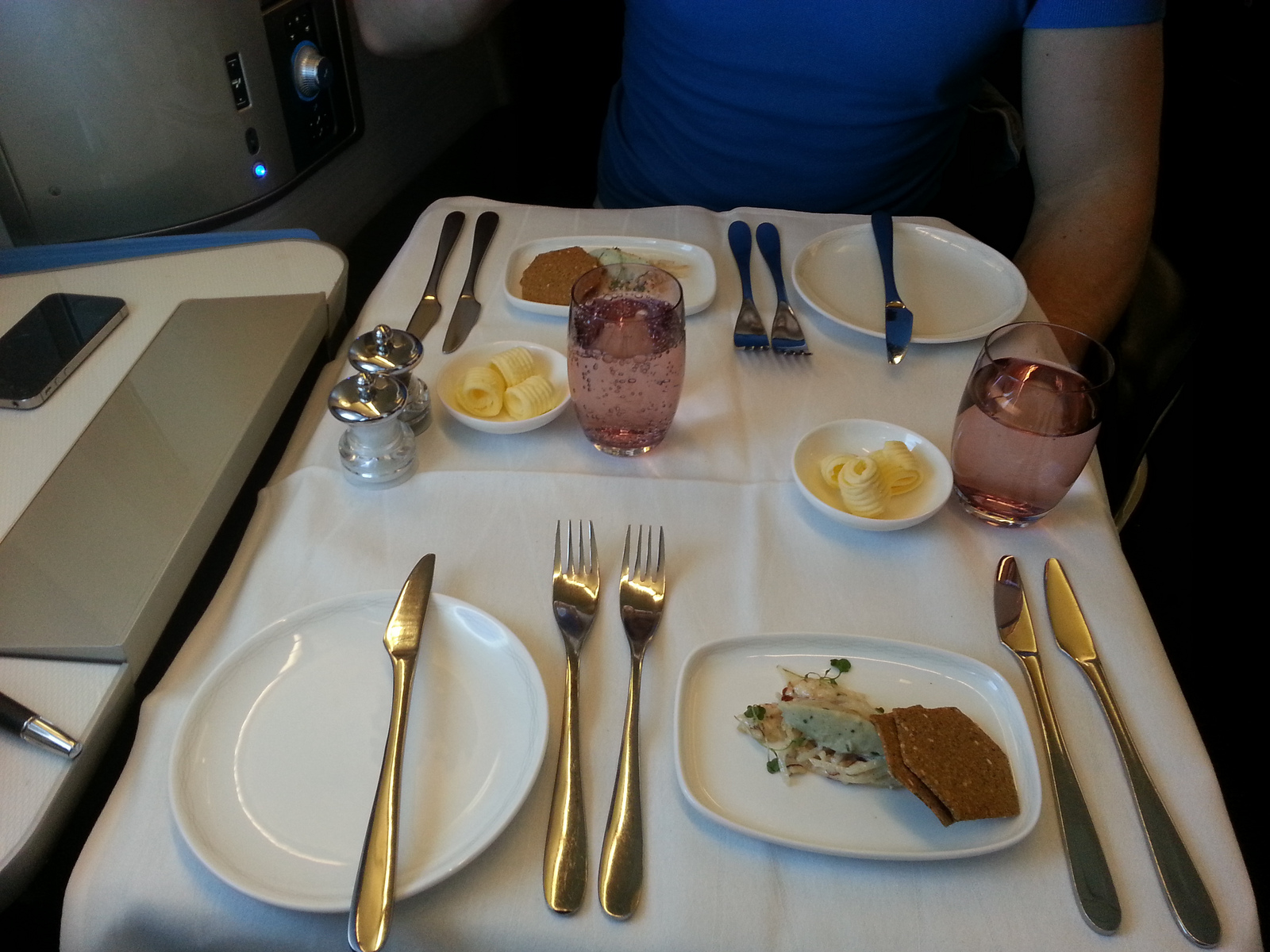 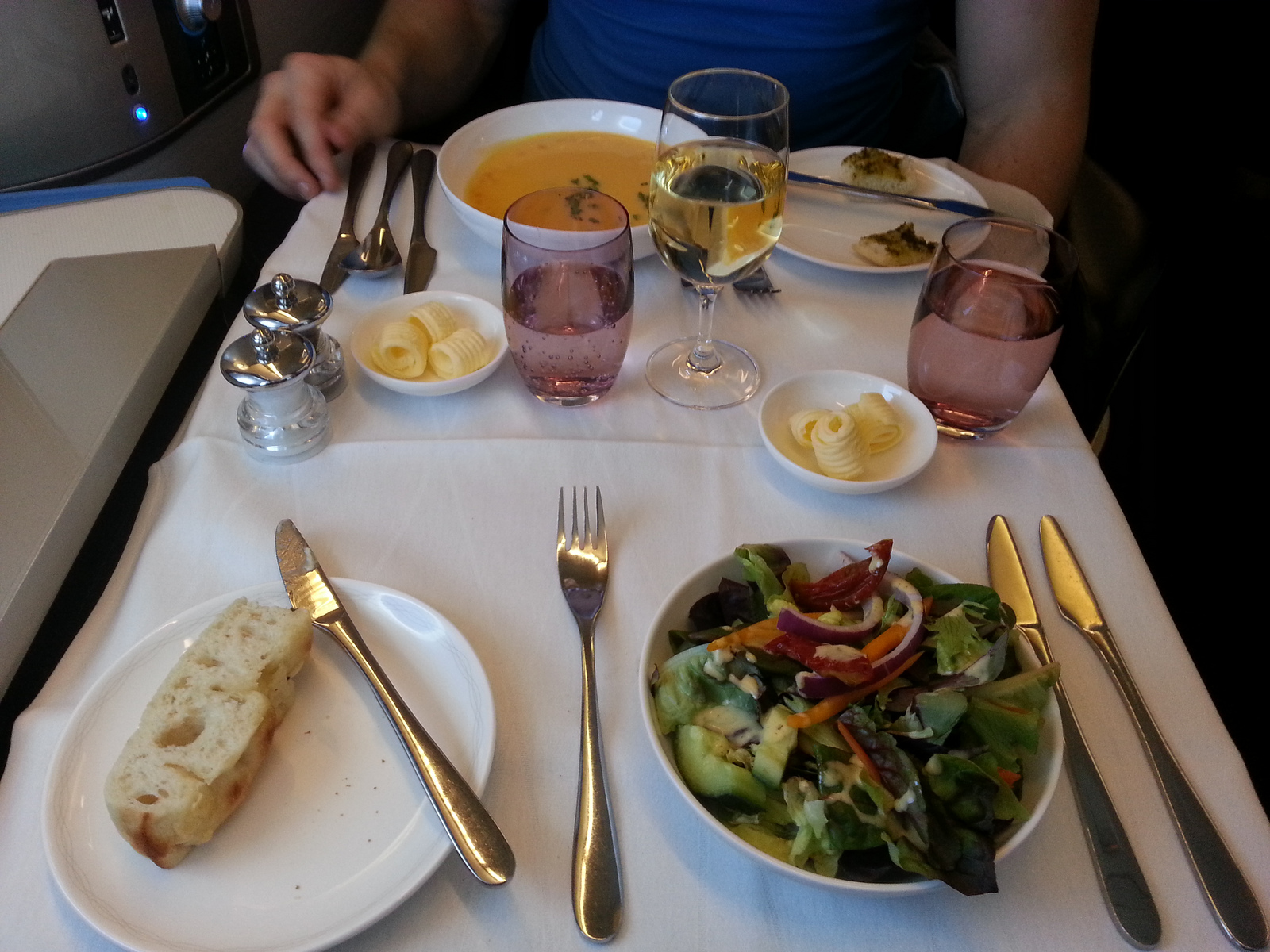 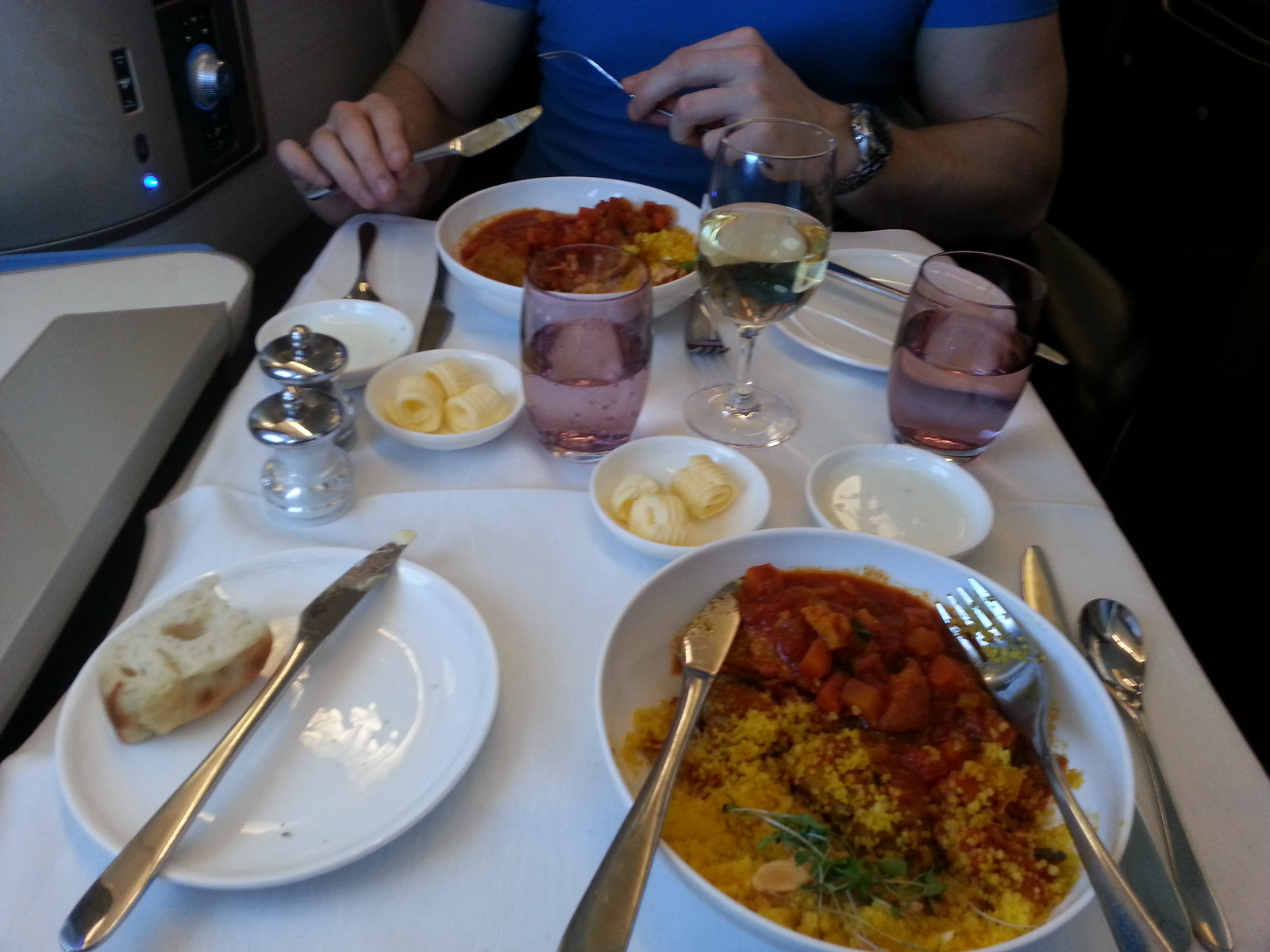 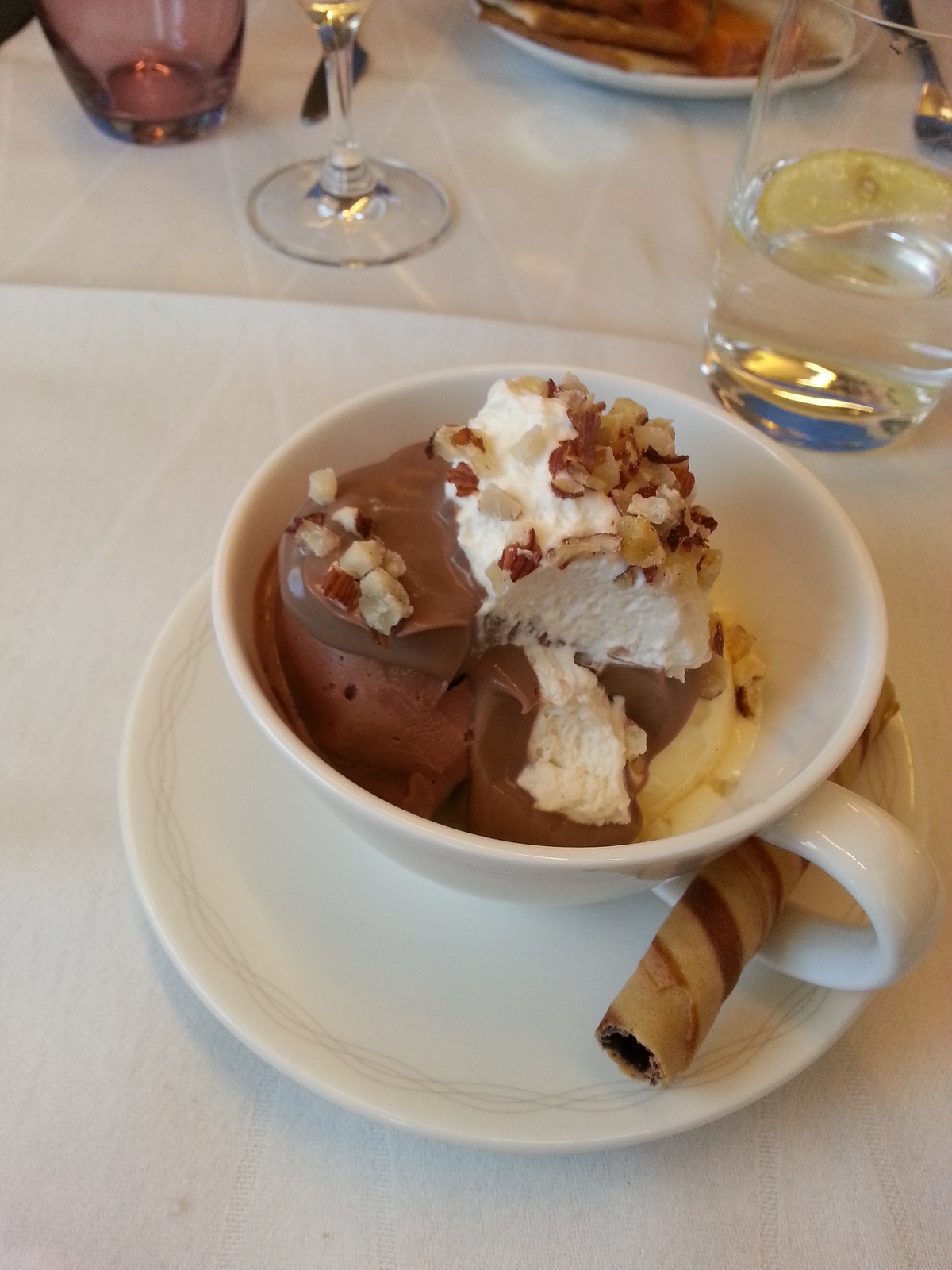 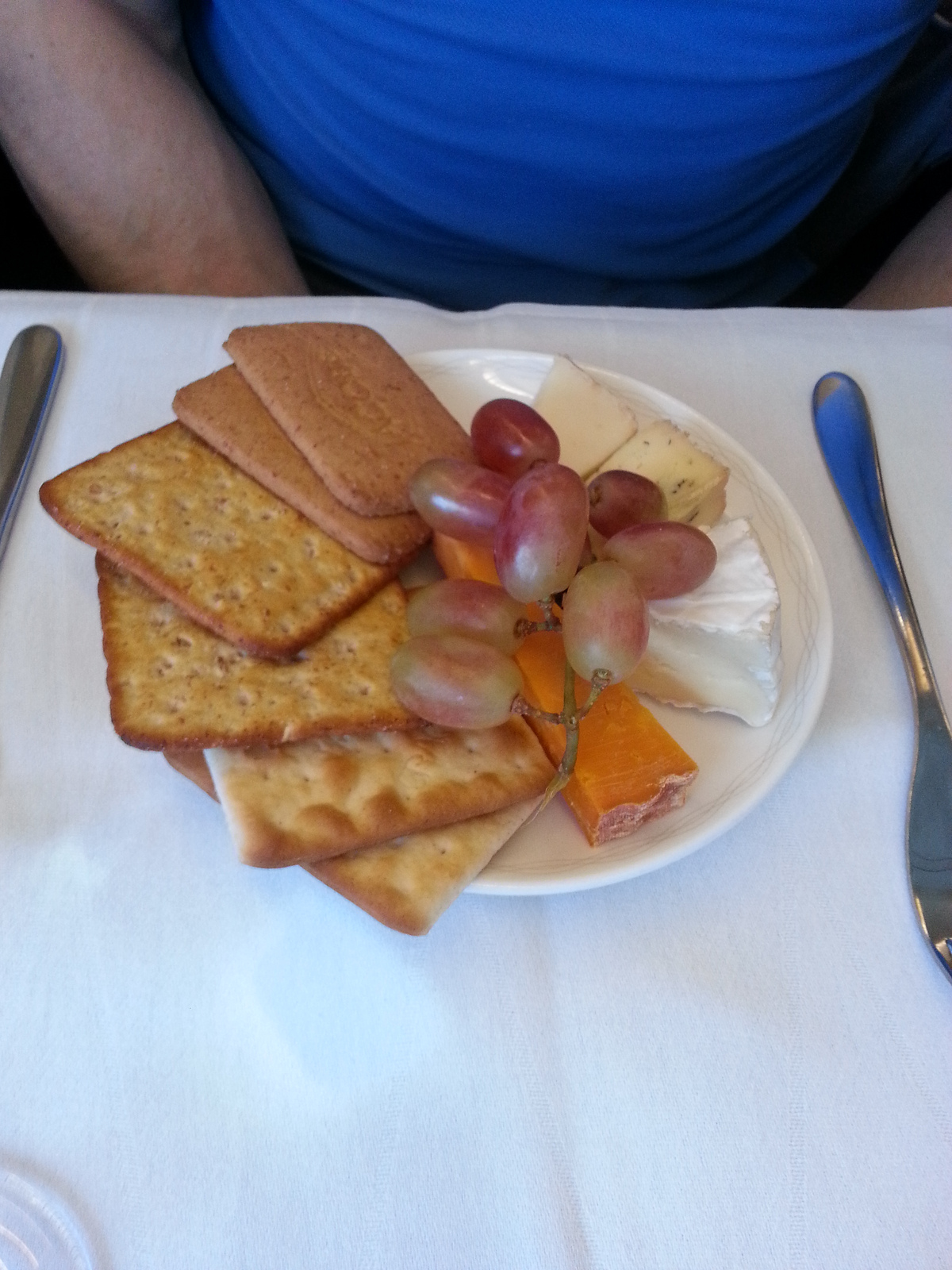 After a few hours of playing games, listening to music, the crew offered us afternoon tea (remember First still has dine when you like so we could have anything at any time), we accepted and were soon presented with some warm scones, the most fantastic sandwiches I have eaten at such height, not in the slightest bit dry, and there was a section of mini cakes. Coffee was also served, again the best I have had on a flight, mainly due to BA using a Nespresso machine, I have one of these at home and love it on the ground too!

As this was only a short flight to JFK it was soon time to land, and the normal BA 20 minutes to land announcement was made and the crew started to tidy up the cabin, while still fulfilling drinks orders. Cabin crew were seated on our final approach and we made a smooth landing and a quick taxi to the gate. It took a couple minutes to attach the air bridge, but thankfully it was attached to L1 and Club were held back while First disembarked. It was a little walk to the immigration hall where we arrived expecting the worst after all the JFK horror stories we have heard, but were surprised to see a 100% empty hall. So we were very quickly through immigration, with a shorter than has become customary grilling, and the few steps to the luggage carrousel that was just starting up. Our bags were some of the fist off so we were soon through customs and going round the corner to the right to drop our bags off for re-check onto our AA flight to DCA. It was simply a case on plonk the cases on the belt and walk off to make our way to Terminal 8 (BA own and use Terminal 7). Once we got to T8 we didn’t need to check in as we were checked in at LHR and given boarding passes, only a short queue for security then following the signs to the American Airlines Admirals Club. At the desk we produced our boarding passes for our flight down to DCA and our passes for our LHR-JFK segment so we would gain access to the AA First Class Flagship Lounge. This is due to arriving on a same day international OneWorld First Class flight.

There we waited for our flight to DCA.