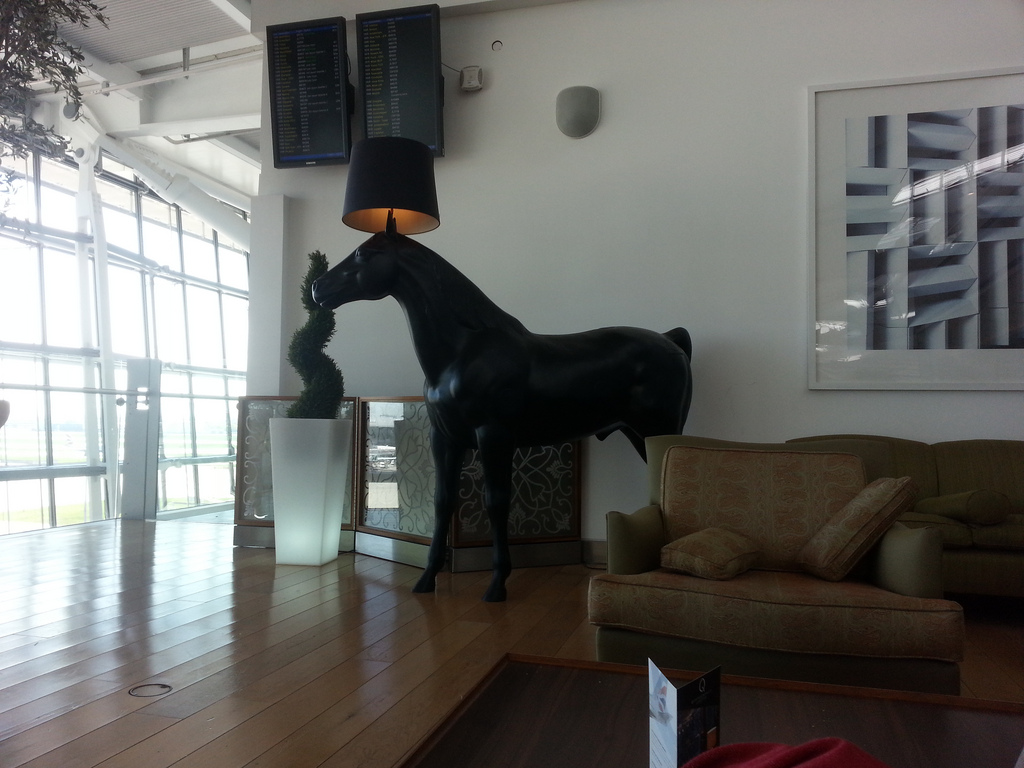 This trip was a joint Birthday outing for me and my farther-in-law (well that’s the excuse we gave our wallets!). As the in-laws hadn’t travelled first before we decided we would treat them and we would all go first class.

This was the first time I was taking a non-morning long-haul flight (out of London), so was strange not knowing what to do with ourselves before heading to the airport! We had decided to get to the airport early as we had nothing better to do, and could always fall asleep in the CCR. We arrived at about 12:20 after a detour for some forgotten items, and dropped the car off at Valet Parking, very friendly service and not far to walk to get to first class check in.

There were two members at staff standing at the welcoming podium, both welcomed us and one directed us to a couple of available check-in agents. Check in was efficient, if a little lacking in chit chat. Boarding passes issued and directed towards fast track. Now, fast track was fast for my partner but not for me! The security officers got suspicious about a laptop in the tray of the lady in front of me. After waiting for them to declare it suspicious, pull it aside and call the police, I kept waiting, then noticed that passengers that were behind me were getting their hand luggage through, where had mine gone?! Just as we were about to ask what had happened, we turned around and found they had re-loaded my items onto the belt behind. Nice to get my luggage but poor that the Security Officers didn’t advise me of the swap (this is open to all sorts of abuse as I wasn’t able to see my bag at all times!). Time for the 5 paces it is to get to the “million pound door”. Warmly greeted and waved through.

Arrived at the CCR entrance desk and had our boarding passes scanned and were wished a pleasant time. Popped over to the luggage desk and dropped off our hand luggage, then made our way out to the terrace. Here we relaxed for some time, having a couple of drinks. 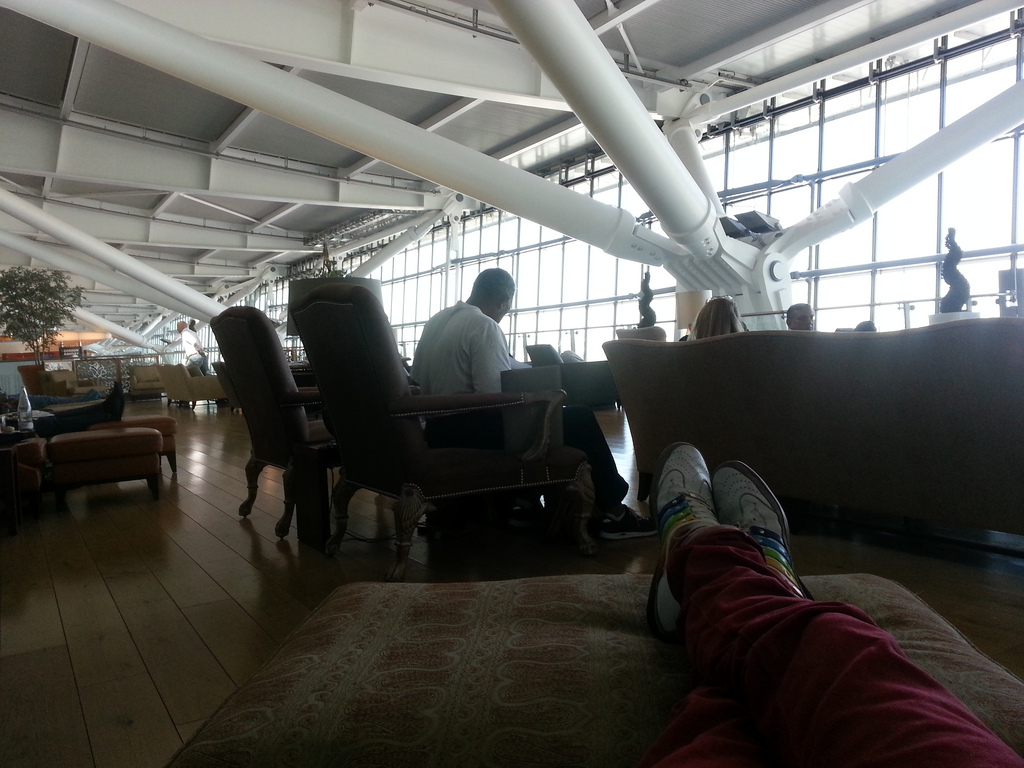 We decided that we would have lunch in the dinning room section and made our way over, warmly greeted, we were shown to a table and given menus.
The menu was: 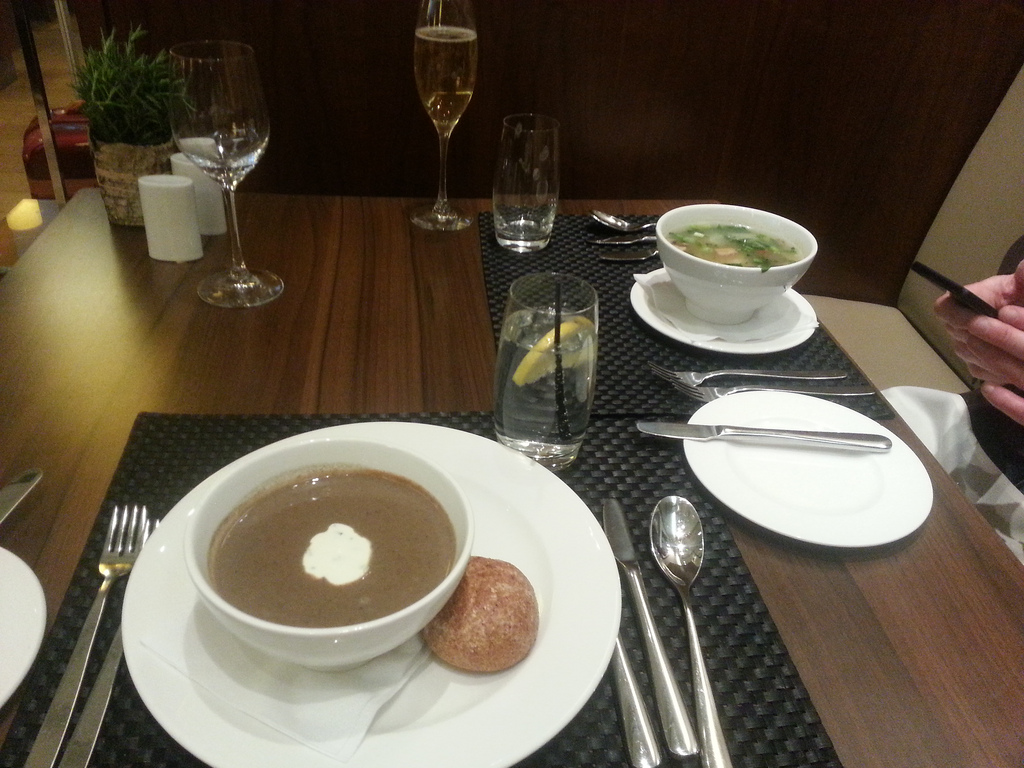 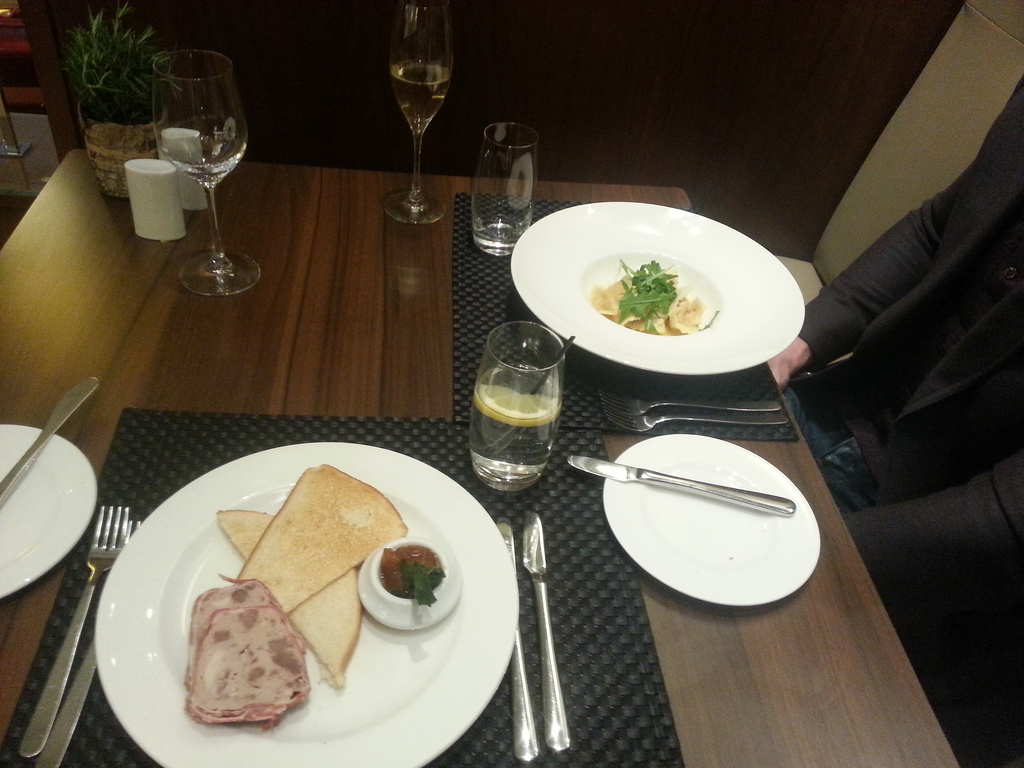 The food was nice and the service was good, though you could tell the waitress was a bit stretched as she was the only one and the area was quite full.

We now decided to have a wonder around the other lounges just to see what they were like. First we headed upstairs to Galleries Club (south). I’m glad we weren’t travelling club! I’m not saying it is bad, but having only travelled business on Virgin, it’s quite different! The furnishings looked good, the self serve bar looked ok, not fantastic but good for a lounge. All the food was self serve buffet style, the deserts did look quite nice, I was tempted but didn’t want anything too heavy, they all seemed very creamy.
Next we headed out into the main terminal and walked all the way around it, T5 is a lovely building and lots of places to sit that aren’t busy. Brief stop at Gucci to buy a belt, and my partner got a “see you next week”, should I be worried for the bank balance? 😛 after our walk we headed into the Galleries First Lounge, were upon scanning our boarding passes they said “You know you can go in over there?”, and smiled when we said we were just having a look around. In here it felt a bit nicer than Club, less people around and more space between chairs. There is a buffet and sit down option in here, again the deserts looked nice! Time to head back to the CCR, welcomed back with no need to show boarding passes.

Back out to the terrace for some more drinks. Now it was about 15:00, the time the in-laws were due to make their way to Heathrow, so out come the iPad and “find my iPhone” – fantastic for tracking them all the way! They made it in excellent time, they were very lucky with the M25 behaving for once. From the terrace we could watch them make their way through security (big design flaw about T5, shouldn’t really be able to watch it!). Once they arrived it was Champaign all around and the lovely server bought out some nibbles. 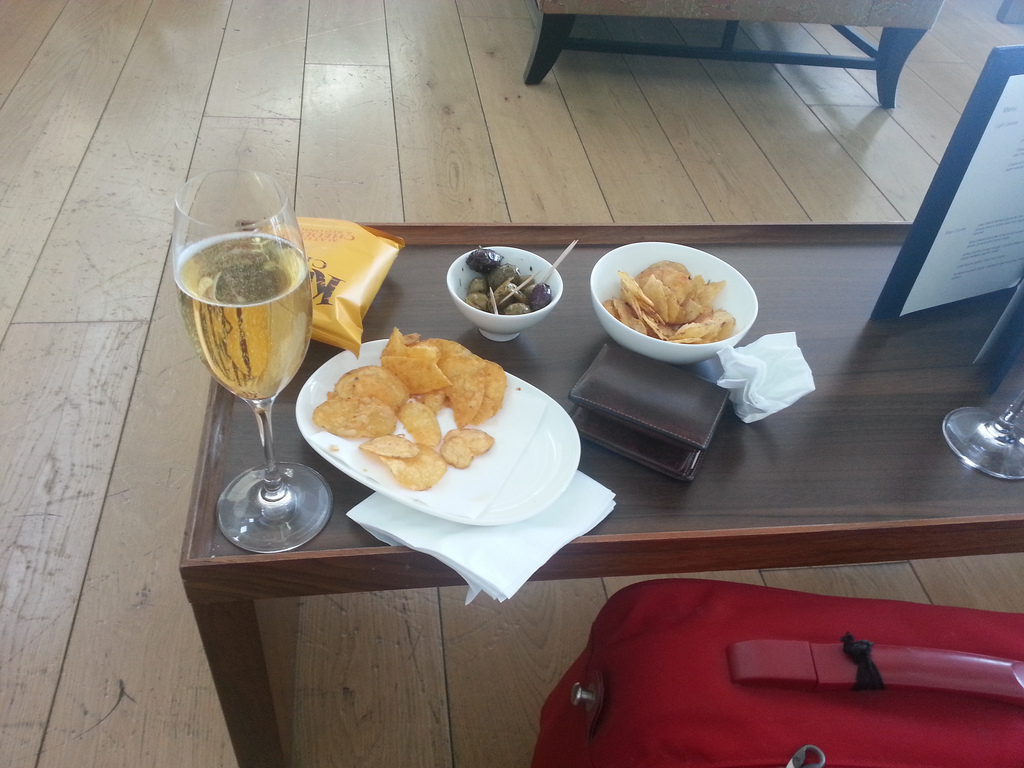 These soon went and as the in-laws were hungry we ordered some food to eat out on the terrace. I had some desert (finally!) the chocolate fondant was perfect!. 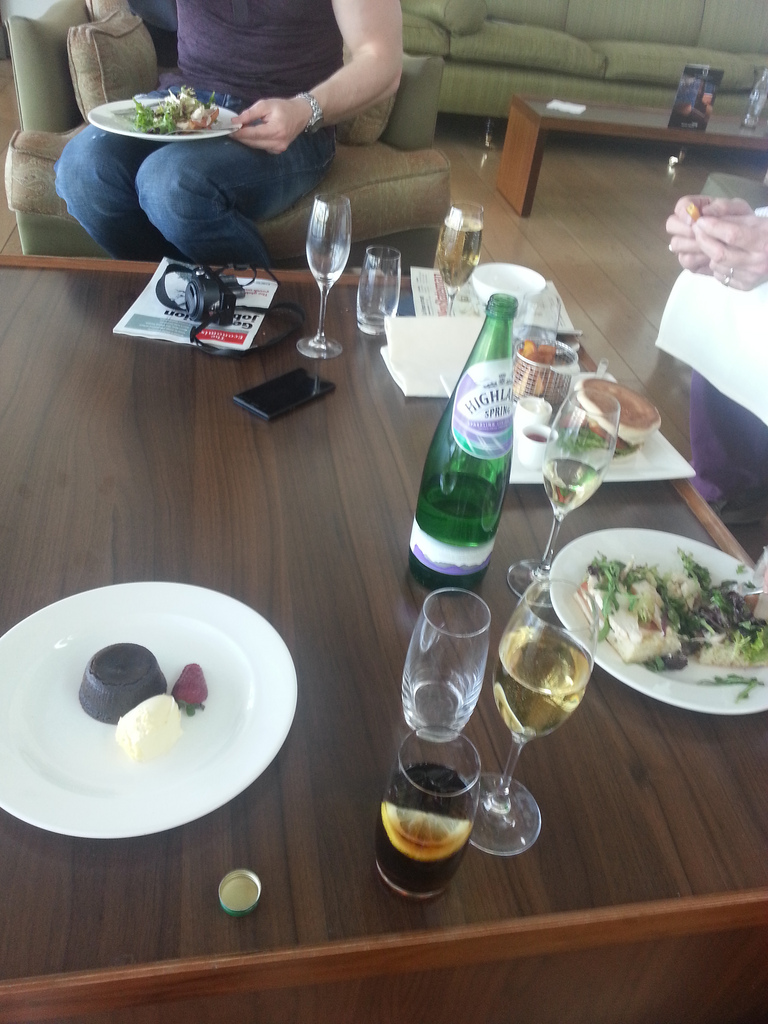 Not too much longer after we decided to head to the B gates.

Once at the B gates we had suddenly become parched, and as the gate wasn’t actually open we headed into a deserted Galleries Club for some water. As we arrived upstairs we heard the gate open, so it was only a quick pit stop. Down to the gate, clear priority boarding lane, boarding pass scanned immediately and it was down onto the jet bridge. Once at the door, the CSD welcomed us all, “ah you’re the Hamster party! One of the first to check in”, slightly odd comments but much welcomed . We were all shown to our seats and then offered drinks. While settling in, we were each given a wash bag and asked if we would like pyjamas, there was a blanket and slippers on the foot rest/buddy seat. 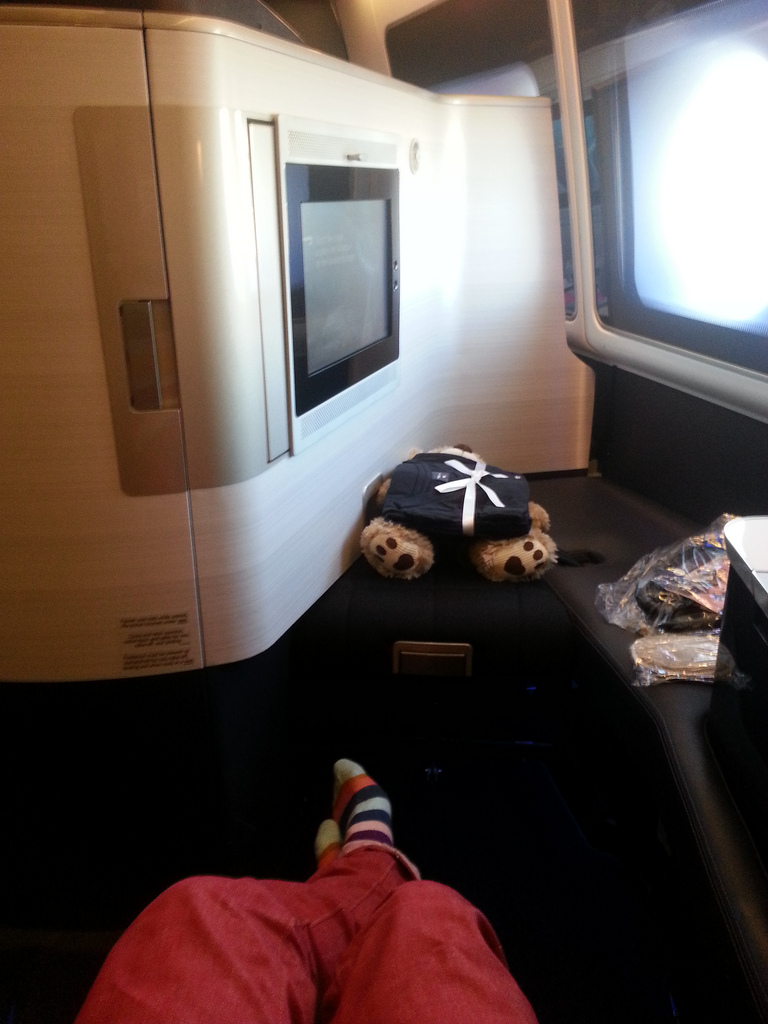 Time for take off! The First cabin was about 2/3rds full and on the 777-200ER there is a great sense of space in the cabin, and oh so quiet! Hot towels came round (seemed a little cold in one corner) followed by a drinks round. Drink and warm sticky nuts soon arrived with a smile. I decided to watch a couple of TV programs on the IFE (so much choice!). The CSD made his rounds and welcomed me by name and engaged in general chit chat, saying he would look past the two teddy bears that had been sneaked onboard “seeing as you have paid for 4 first class tickets!”… Very friendly man. Soon CC came around and asked if we would like to dine, we all said yes and requested that we joined each other, meal requests taken, the tables were set up.
The menu was;

ICE CREAM SUNDAE
Custom made to your preference of ice cream, sauces and toppings.
Please ask your cabin crew for today’s choices.

CHEESE PLATE
MULL OF KINTYRE
This cow’s milk cheese may contain small crystals that give the
cheese its distinctive crunch. It has a sweet yet savoury taste.

And the wine menu;

The food was very nice, I didn’t have dessert as I was full so i decamped, leaving the rest, to go back to my seat to watch more on the IFE. From my seat I watched as my partner and the in-laws had their dessert/cheese, it was impressive to watch the crew go to so much effort in the way they were serving and how immensely polite they all were, always addressing by name (they weren’t reading it off a sheet!), lots of smiles and very friendly.

A little later into the flight, after several offers to top up my drink, we were asked if we would like anything else to eat, there was a selection of nibbles instead of the normal afternoon tea that is offered on earlier flights, but this consisted of pretty much the same! I was still full, so I passed, but the rest of the clan did partake and it looked very nice and got positive reviews!
Menu; BISTRO SELECTION Penne pasta in cherry tomato sauce with borlotti beans, aubergine and Kalamata olives

WE OFFER YOU A SELECTION OF THE FOLLOWING TWININGS TEA:

After some time, three of us decided to stretch our legs and have a look at the rest of the plane, the in-laws hadn’t flown BA long haul for many, many, years and my partner and I had only flown First on BA. The plane seems shorter than I had expected, but it was nice to get a look at WT, WT+ and especially Club (to compare to Upper on VS). I must say that it didn’t look TOO squashed at the rear of the plane, but then again I wasn’t sat in the seat for several hours! On our arrival back, the CSD came over and asked if we were alright, saying that he thought we were lost and that he thought we not be feeling quite right! It was nice that he thought he could come up to us and be jokey; it makes the experience so much more personal. With only a little amount of time left, the crew still had the time to chat to the in-laws, asking why they were going away, what they were going to do along with other general chit chat.

The 20 minute warning was given, a quick tidy up of my belongings into my hand luggage, put shoes back on and but teddies seat belt on. Crew cleared up the cabin, well as often in first, only breakables were cleared, still plenty of other things left like pillows, cushions, blankets, slippers, headphones etc. that could still fly about. Smooth landing and quickly to the gate, but there was a few minutes to wait for the bridge to connect. Club were held back while first de-planed, at the door all the crew were saying goodbye (by name) and wishing pleasant onward journeys.

Short walk to customs, absolutely no queue, seen very quickly, nice pleasant officer who didn’t ask as many questions as normal. Off to baggage claim, as we walked up to the belt it started and bags were coming round, all of ours were with the first off! Then it was a pass through customs, handing over the card, and into the arrivals hall where we were met by someone from the hotel who took all our bags on a trolley and took them out to our awaiting car and handed us over to our driver. It was a very quick journey into to Boston and to Boylston St.

This was a fantastic flight, the most amazingly nice crew I have ever had the pleasure of meeting. Well done BA! It was great to take two people who hadn’t flown first before as we could see all their reactions to the lounge and onboard. The seat is fantastic, always comfortable, heaps of space, the wardrobe is fantastic, and who ever thought of the cubby hole for shoes in it should be given a gold star!
10/10