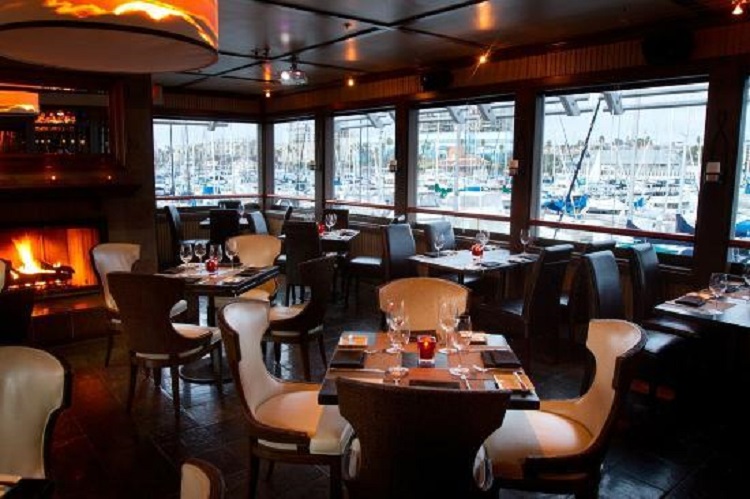 Phil and I ate at Baleen when we stayed for one night at the attached Portofino hotel & Marina, both for dinner, and the subsequent mornings breakfast. We chose to dine here for two reasons; firstly for convenience (after a 12 hour flight neither of us felt like making too much of a journey into LA) and secondly for the menu, which whilst not overly spectacular in terms of variation or unique style, had some solid dishes that sounded filling and of good quality.

The restaurant itself is on the Marina side of the hotel complex, and shares a lot of the architectural style as the hotel it belongs to; though a significant difference in this regard is that the window frames and beams are a dark wood which matches the parquet floor, which itself matches the chairs and tables. The effect of this design choice is that the restaurant is rather on the dark side, an effect exemplified if you happen to dine there after the sun has set, and the only illumination comes from spot lights in the ceiling and some small table lamps. I daresay this effect is denuded during the summer months when it remains lighter for longer, and natural light can flood in from the large windows that overlook the Marina, but in winter it did seem a little like eating in a poorly lit wooden box.

In terms of the menu and food quality, I would have to describe it as good, but not outstanding; it’s a casual experience rather than high end dining. However, this by no means should give you the impression that Baleen isn’t worth a try if your in the area. The menu has a distinct Southern California feel, with Mexican influences fairly evident in most of the dishes that are offered, with a few home style american favourites thrown in for good measure. Offerings included Short Ribs with Yukon Gold mash, Sautéed Snapper with seasonal vegetables, All American Burger with fries and garlic aioli, and Baja style tacos, with entrees starting at a very reasonable $16. In terms of quality vs this price point, then I would argue it’s priced about right. The front of house and table staff were all friendly, and service was efficient and courteous, despite it being a busy evening. In terms of beverage selections, there was an interesting array of cocktails on offer, with a mix of classics and unique drinks available. The wine list was a bit of a let down, though for the price point (bottles averaging $60) the selection was far from awful.

Breakfast is served downstairs on a wooden deck facing the Marina, and as with the menu for dinner, it is a blend of American classics and southern influences; cornmeal pancakes with fruit, frittatas, steel cut oats and breakfast burritos. Quality and price point were both reasonable, although the view of boat keels took something away from the overall experience.

Baleen is an interesting restaurant, with a menu that should appeal to a reasonably wide audience, but you should keep in mind when considering whether to dine here that this isn’t fine dining. A solid choice for a good meal, but not a special one.