BA’s Gig on a Wing

Supermodel Georgia May Jagger, fashion designer Alice Temperley MBE, and singer Leona Lewis came together last night (24 October), to fly the flag for Britain, at the ‘Gig on a Wing’ event to celebrate British Airways’ new A380 superjumbo operating to Hong Kong.

Showcasing the best of British music, fashion, design and cuisine to an exclusive audience of local leaders in travel and entertainment, the event took place inside a hangar at Hong Kong International airport, with the A380 forming the centrepiece of the show. Georgia May Jagger, daughter of Rolling Stones legend Mick Jagger took to the stage with British Airways Chief Executive Keith Williams to close the evening, and said: “I’m so happy British Airways invited me to Hong Kong on their first A380 flight. The service, food and flat beds on the long haul flights are second to none and I always arrive feeling well rested. I love Hong Kong too and look forward to returning and spending more time in this great city”. 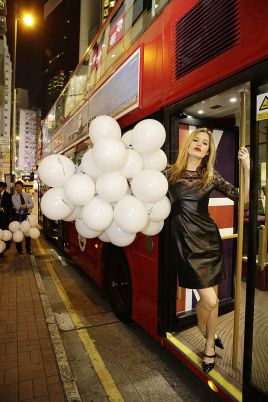 Keith Williams, British Airways’ chief executive, said: “Today marks another milestone in our long and proud tradition of connecting Hong Kong and London – two truly global hubs. For over three quarters of a century, this city has been an important part of British Airways’ worldwide network, so we are extremely delighted to be operating the state-of-the-art A380 on the route, and to also be the first to fly it non-stop between Hong Kong and Europe.”

British Airways’ ‘Gig on a Wing’ event launched with a glamorous fashion show by acclaimed British designer Alice Temperley MBE. Fresh from showing at last month’s London Fashion Week, Alice treated guests to her Spring/ Summer 2014 collection from the award winning Temperley London collection. Models descended the steps of the A380 aircraft onto British Airways’ specially created ‘runway’ catwalk. Temperley, who has designed dresses for stars including Keira Knightly, Rihanna, Beyonce and The Duchess of Cambridge, said: “I was thrilled to be asked by British Airways to showcase my new Spring/Summer 2014 collection in Hong Kong and at such a unique and glamorous event. The people here really appreciate cutting edge design, fine tailoring and effortless style, very similar to that of British Airways new A380.”

This was followed by an exclusive live performance from multi-platinum selling artist and former X-Factor winner Leona Lewis. Lewis performed tracks on a specially created stage, flush with the A380’s 261-foot twin-engine wingspan. Leona’s set included a cover of Lenny Kravitz’s “Fly Away”, her number one selling track “Bleeding Love” and “Come Alive”. Speaking after her performance, Leona said: “Performing on the wing of the British Airways A380 was an incredible experience and one I will never forget. After singing on top of a double-decker bus at the 2008 Beijing Olympics, I thought that would be a hard act to follow, but tonight’s ‘Gig on a Wing’ event was very special and unique”. The Langham Hong Kong provided guests with a very British affair, treating them to traditional treats that included mini pork pies, Sunday roast and fish and chips canapés, followed by a true taste of home with an afternoon tea boasting a chocolate London bus, a marshmallow Big Ben and an Alice Temperley inspired vanilla shortbread.

This was complemented by Flower Duet cocktails. Luxury five star hotel, The Langham Hong Kong, is located in the heart of Kowloon. Rich in tradition and refined over 140 years, The Langham Hotel combines the very best of the old and the new. British Airways operates two daily non-stop flights between Hong Kong and London Heathrow. The A380 will serve flight BA25 from London to Hong Kong, and BA26 from Hong Kong to London. Visit British Airways for more information.