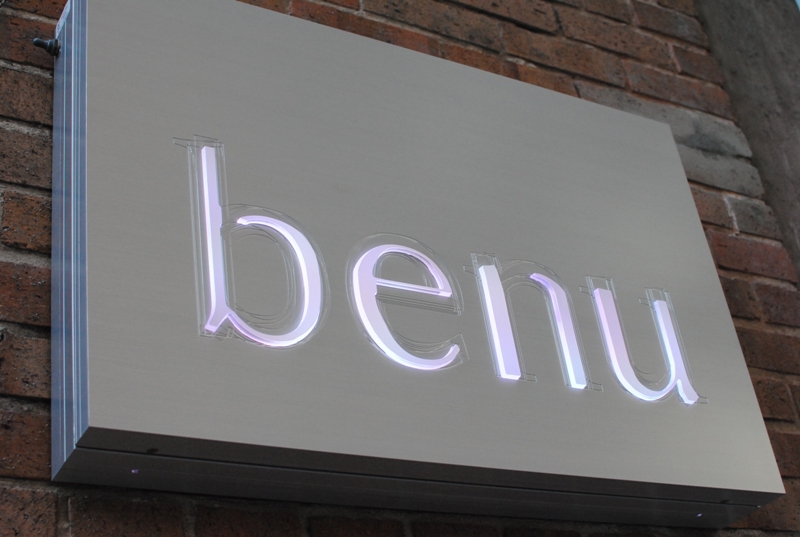 Phil and I dined at Benu on our last vacation to San Francisco in the Summer of 2013.  I had long since had the restaurant on my target list for the city, though for various reasons I had not managed to get through its doors – part of the reason being the sheer number of excellent restaurants in the city, combined with finding ourselves drawn back to our favourites more often than not.

Benu is hidden away in SoMa, the building being a very unimposing 19th century brick affair, with a small well-manicured courtyard at the front.  This gives the effect of entering a haven away from the lights of the city – a small gastronomic idyll that manages to punch well above its weight in terms of brilliance and execution.

The restaurant itself can be described as minimalistic, the décor being simple, and taking inspiration from the finest Kaseski style restaurants in Japan and the East.  A black and white palette acts as the stage upon which Corey Lee performs his culinary magic, delivering a series of dishes that both excite and enthral, all beautifully presented and explained by the professional staff, who seem to float around in the background attending to clients every needs.

Philip and myself opted for the tasting menu, very reasonably priced at $195 at per person, excluding wine.  As Philip has an allergy to seafood, I did have certain trepidation at how the restaurant would cope – as its menu is balanced towards the ocean; however Corey Lee and his team rose to the challenge admirably, creating a perfectly balanced menu for him that was as visually and culinary stunning as mine.  What was particularly impressive was that the wait staff had already been made aware of this, and the printed menus on our table when we arrived had been modified to reflect the changes.  This was in sharp contrast to my dealing with another San Franciscan restaurant – Saison – that flatly refused to even entertain Philips allergy; ironically enough losing out on our custom in favour of Benu.

The food itself really does take centre stage here, with both the flavour combinations and presentation being thoughtfully tailored to both reflect the traditional and the modern in equal balance.  Whilst it isn’t possible to list all the dishes we worked our way through, a few really did stand out.  The Lobster Coral Xiao Long Bao was a perfect combination of sweet and salt, the lobster being perfectly cooked and succulent, whereas the Eel, Fuille de brick and crème fraiche was delightfully savoury, and a brilliant combination of different textures.  I also opted for the supplementary Abalone dish – being a preserved variation – and served in such a way to allow the diner to really appreciate the delicate flavour of the Abalone.  This dish was an additional $250, however I really think the quality of Abalone and the preparation method that was explained in detail by Corey Lee himself at our table justifies the expense.

One of the most memorable dishes, purely from a preparation perspective, was the delicious Chicken Consommé that was served tableside, the chicken glaring out from inside the glass teapot from which the consommé was poured.  Whilst some may find this type of preparation squeamish, I think it added to the experience and really brought out the flavours in the dish.

Benu also has a fantastic wine list, with an equally impressive Sake list to match.  There is no formal wine paring, however the sommelier was good enough to suggest a number of bottles that would suit the meal, and unlike some restaurants we have been to, I feel he didn’t simple pick bottles with a high mark-up.  In fact, a number of bottles he selected were so good I have made a point of sourcing them when I got home, in particular a stunning white Spanish offering Aborino Do Ferreiro (2010).

Overall, I simply cannot fault our experience at Benu., the food was stunning and unique – and manages to stand out despite being in a city renowned for its culinary pleasures.  I wouldn’t hesitate to return.

The total cost of our meal, including wine and optional supplementary courses, was $1050.00.