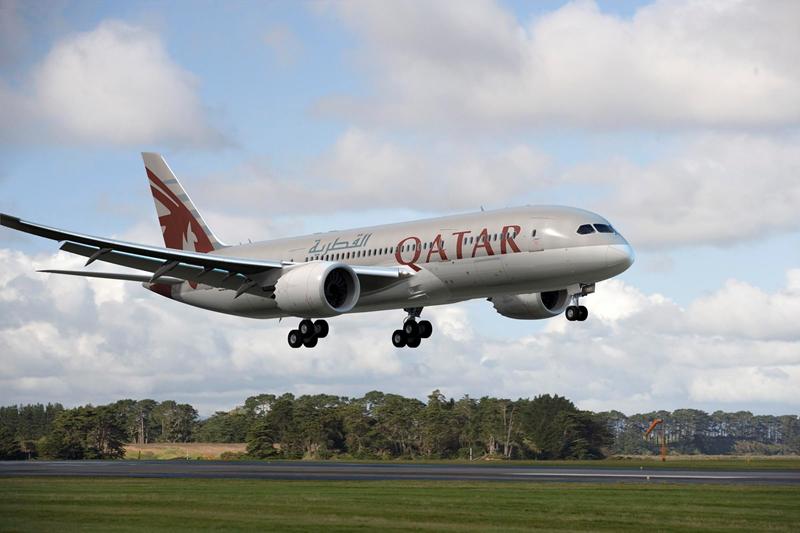 Heathrow today launches its ‘Fly Quiet programme’, becoming the first UK airport to list airlines according to their noise performance.

Every three months a Fly Quiet table will take the top 50 Heathrow airlines (by number of flights per quarter) and list them according to six noise related criteria. The airlines receive a red/amber/green rating for each criterion, as well as an overall score which allows airlines to understand how they are performing in relation to other airlines. If they are not meeting the minimum performance targets, Heathrow will work closely with them to improve their rating.

Matt Gorman, Heathrow’s Sustainability Director, said: ‘We are at the forefront of international efforts to tackle aircraft noise and are committed to continuing to reduce the number of people affected by noise. The launch of the Fly Quiet programme signals our firm commitment to being transparent about aircraft noise and our progress in reducing its impact on local communities whilst still safeguarding the vital connectivity and economic growth that Heathrow provides.’

John Stewart, chair of noise campaign group HACAN said; “We welcome this initiative from Heathrow. It is a constructive move to improve the noise climate.”

In the first ever Fly Quiet league table1 covering July to September 2013, 80% of the listed airlines have met Heathrow’s minimum requirements on noise, with 94% meeting at least 5 of the 6 metrics. British Airways short haul took top position as the quietest airline operating out of Heathrow. Virgin Atlantic’s Little Red took second place.

“We are very pleased that our short-haul fleet has proved itself the quietest at Heathrow, and we know we can do more. Overall, we have a noise reduction target to reduce the average noise per flight by 15% by 2018. With the introduction of more new aircraft and continuing operational innovation, we are confident of achieving this for the benefit of communities living around Heathrow and all the airports we serve. This autumn we have introduced nine new long-haul aircraft, all of which are significantly quieter than their predecessors, and we will take delivery of more than 30 further aircraft in the next three years.”

In the last year, the number of movements by new, quieter A380 and 787 aircraft has doubled, both in terms of the percentage of movements and the number of airlines operating them (from one to two per cent and from six to 12 airlines). Five of the top ten airlines in the Fly Quiet table are long-haul operators, highlighting the improved performance of new long-haul aircraft like the A380 and B787.

Over 2013 the number of airlines rated red for ‘Continuous Descent Approach’ has also decreased from 16 to three. 49 out of 50 airlines achieved a high standard of track keeping (keeping within designated routes) demonstrating the high standards of performance at Heathrow. The table also shows that 46 of the 50 airlines are using a fleet which is Chapter 4 compliant – currently the quietest international target for aircraft noise certification. All airlines achieved 100% adherence to the pre-04:30 arrivals measurement. Heathrow recognises that early morning flights cause particular disruption to local residents and will continue to work with airlines to focus on this important category.

The launch of the Fly Quiet programme follows the publication of ‘A quieter Heathrow’, a report which sets out the steps Heathrow takes to reduce aircraft noise. It brings together the range of measures designed to meet the Government’s aspiration ‘to strike a fair balance between the negative impacts of noise and the positive economic impacts of flights’1. It sets out actions across five key areas that Heathrow can take now to reduce aircraft noise, while safeguarding the connectivity and growth that Heathrow currently provides: encouraging quieter planes; implementing quieter operating procedures; noise mitigation schemes and influencing land-use planning; applying operating restrictions and working with local communities. To read the full report, visit www.heathrow.com/noise

‘A quieter Heathrow’ in turn follows a report published earlier this year by Sustainable Aviation which set out the industry’s plans for reducing aircraft noise in the UK. The ‘Sustainable Aviation Noise Road-Map’ demonstrates that quieter aircraft, the implementation of better operating procedures and improved land-use planning mean that noise from UK aviation will not increase despite more flights over the next 40 years. 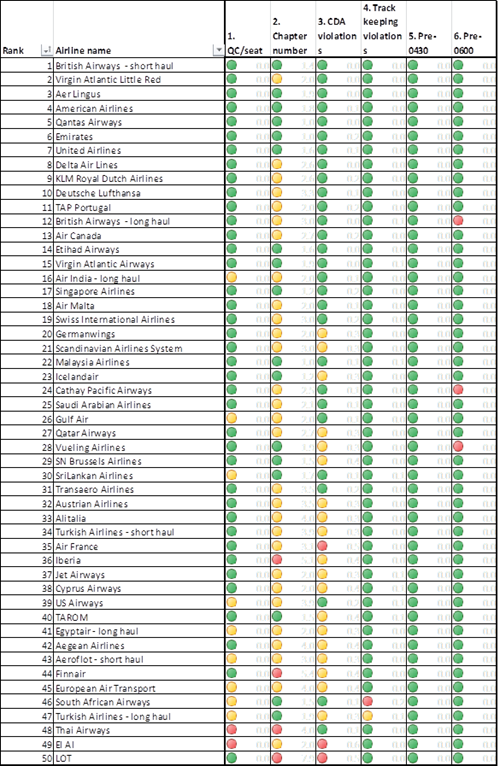 Airlines were consulted on which metrics would be used to compile the Fly Quiet league table. Each metric will be assigned a “RAG” (Red, Amber, Green) status based on the performance bands set for that indicator. As a result operators towards the top of the table will typically have more ‘green scores’ than those towards the bottom. Because scores fluctuate within a band it is possible for an airline with all green scores to sit further down the table, than those with amber or red scores. Individual metric scores will not be published. The ratings are corrected for the number of flights flown by each airline so airlines with more flights are not penalised.’

The metrics below make up the Fly Quiet League Table:

1. Noise quota count/seat/movement. This is a relative noise “efficiency” metric which scores the noise efficiency of an operator’s fleet, recognising that whilst larger aircraft tend to be noisier they also carry more passengers. It is calculated by dividing the sum of QC for arrivals and departures by the aggregate seat capacity and total movements by airline of those flights. This provides a balance between a QC/seat or QC/movement metric which will tend to overly bias long haul or short haul carriers respectively.

2. Noise Certification – each aircraft is required to have a noise certificate which can be used to determine its relative performance against ICAO noise performance targets (Chapter 3 and Chapter 4). This allows us to recognise “best in class” and compare performance across different types. An average ‘per movement’ Chapter number value is calculated for each airline, which favours the airlines operating best-in-class, modern, quieter aircraft more frequently.

The minimum performance target in these metrics for the purpose of the Fly Quiet programme is Chapter 4. If the average score of an airline’s fleet operated to and from Heathrow is less than the Chapter 4 equivalent a ‘red score is awarded. A ‘green’ score is awarded if the average noise certification score of an airline is better than the equivalent of Chapter 4 base charging category (see our Conditions of Use www.heathrowairport.com).

3. Arrival Operations: Continuous Descent Approach (CDA violations). CDA involves aircraft maintaining a steady angle of approach when landing at the airport, as opposed to stepped approaches which involve prolonged periods of level flight. This reduces noise because it requires less engine thrust and keeps the aircraft higher for longer. By following a CDA on arrival, the noise on the ground can be reduced by up to 5dBA in areas away from the final approach paths. The purpose of the indicator is to capture the non-CDA arrivals and so potentially reduce the disturbance caused.

The minimum performance target for the CDA compliance is set for 55% for the Fly Quiet programme. An airline achieving this but not exceeding 75% gets an ‘amber’ score; CDA compliance of 75% and more means a ‘green’ score is awarded.

4. Departure Operations: Track deviations on departure (TK violations). Aircraft are required to stay within ‘noise preferential routes’ (NPRs) – 3km wide tracks in the sky, designated by the Government to route aircraft away from more densely populated areas as far as possible – until they reach 4000ft. The track deviations indicator is expressed as the proportion of departures that flew outside the NPRs below 4000ft. The purpose of the indicator is to capture the aircraft which operate outside of these boundaries and so potentially cause unexpected noise disturbance. Instances where this occurs for reasons outside of the airline’s control are excluded for the calculation.

The minimum performance target for the track keeping compliance is set for 85% for the Fly Quiet programme. An airline achieving this standard but not exceeding 90% gets an ‘amber’ score; CDA compliance of 90% and more means a ‘green’ score is awarded.

5. Night time Operations 1: arrivals prior to 0430. There is a voluntary arrangement that aircraft scheduled to land between 0430 and 0600 will not land prior to 0430. This is a very sensitive time and issue for local community groups. The purpose of this indicator is to measure adherence to the operator schedules. It is measured as the number of flights arriving before 0430 as a proportion of the total number of arrivals for the airline.

6. Night time Operations 2: unscheduled arrivals prior to 0600. Arrivals scheduled to land after 0600 should not land before then unless there are dispensing circumstances (e.g. Low visibility conditions). This is also a very sensitive time and issue for local community groups. The purpose of this indicator is to measure adherence to the operator schedules. It is measured as the number of unscheduled flights arriving between 0430 and 0600 as a proportion of the total number of arrivals for the airline.

7. As metrics 5 & 6 are limited in terms of the airlines they could affect but are nonetheless important issues for community stakeholders these have been weighted lower than the remaining 4 so as to not result in dramatic fluctuations in an airlines ranking. Instances where metrics 5 & 6 occur for reasons outside of the airline’s control are excluded for the calculation.

The set of indicators is designed to address the aims of the programme whilst giving the operators the opportunity to improve their ranking by short-term (i.e. operational/tactical) or long-term (e.g. fleet planning) measures.