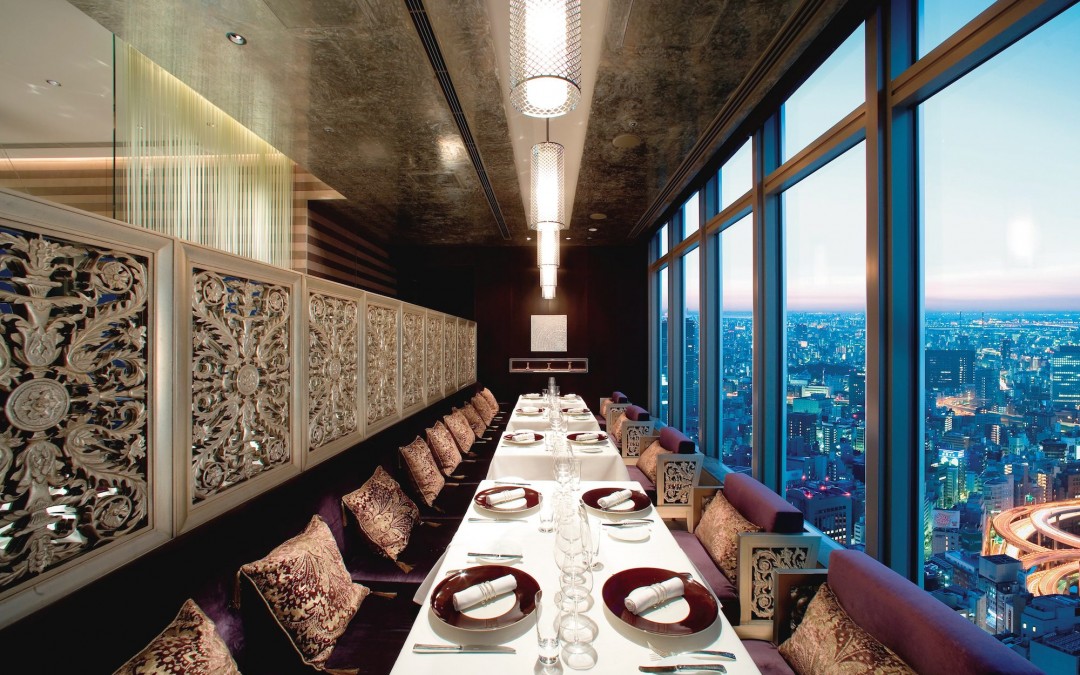 Philip and I dined at Signature during our stay in Japan in May 2014, and whilst I am generally not a massive fan of hotel restaurants – much preferring to leave the confines of the hotel for the evening – I was highly impressed with the quality of food offered by Signature, and – to be perfectly honest – the views over Tokyo were reason enough to dine here.

Signature is one of eight outstanding restaurants at the Mandarin Oriental Tokyo, five of which are one Michelin star or above; Signature is graced with two.  The main lure of the restaurant, aside from the cuisine, is the view – which is naturally stunning as it takes in a vast swathe of Tokyo. Philip and I were fortunate enough to dine here on a clear day, well worth the cost of dinner alone in my mind.

In terms of décor, the restaurant is a little gaudy for my tastes, with sweeping curtains that separate off different sections of the floor and generally make the place seem a little cloying.  This combined with the use of creams and gold’s on the colour palette, and some rather bright lighting gave the impression the designers had been given the remit of making the place look ‘Luxurious’ and had taken inspiration from too many sources.   That being said, I daresay the place could be a 1960’s roller disco by design and it wouldn’t detract from the view.

The restaurant serves a mix of French inspired and modern Japanese cuisine, with a number of difference dining options available; A La Carte, or three different – and progressively longer – tasting menus.   As we had been travelling for a good portion of the day, we opted for the A la Carte option, which whilst being only three courses, was interspersed with a number of amuse bouche and palette cleansers.  The selection on offer was good, with a number of meat, fish and vegetarian options.  The Milk Fed Veal with Baby Artichokes and Foygot Sauce was particularly good, as was the Foie gras raviolis, preserve girolles, peach and brown Madeira sauce.

The quality of the food was excellent, if a little uninspired.  I wouldn’t take that to mean the quality, execution and flavour combinations weren’t good – its simply that it was a little ‘cut and paste’ – allow me to explain.   In my view, when restaurants reach Michelin starred level, their isn’t a great deal of variation in the standard of food offered – it is all, with a few exceptions, excellent.  Therefore, in order to stand out amongst the outstanding, restaurants have to deliver food that really excites, or that is served in unique and unexpected ways.  Eleven Madison Park (Hyperlink to?) is an example of such a place – the food is excellent, but the service (the use of bell jars, tableside preparation, or the infamous carrot mincer) is what makes the place memorable.

Signature meets all the expectations of a Michelin starred French restaurant, but there isn’t really anything that makes me shout from the rooftops about it – aside from the view. You really can’t beat that view.

Dinner for Two, including wine and champagne beforehand, was ¥140000.